So far, I’m not creating as many bracelets as I imagined.  Life seems to get in the way.  Sometimes, I do find a quiet moment at night and I grab that bull by the horns.  Often, staying up too late.

I LOVE buying new beads and materials.  It’s almost scary.  I’ve set a budget, but am having a hard time sticking to it.  I know, I’m bad.  Buying the new stuff is almost as fun as creating.  Eventually, I’d like to move on to other accessories.  This will mean a bigger budget!  = P

I’m up to 21 bracelets in my Etsy shop.  This is exciting!  However, I can’t wait till there are TWO pages!  Small victories.  The blog I branched off and created for SignatureEnchantment seems to be doing ok, but a little slow at times.

Surprisingly, my RA doesn’t seem to be affected by all of this bracelet making.  This was a concern of mine, but my biggest complaint is the tiny beads! They have a way of jumping out of my fingers.  They seem to love the carpet!  I really think they breed there too!  I’ve recently ordered some Hematite beads.  There is talk they are great for people with Rheumatoid Arthritis.  With some quick research I came across this article from Arthritis Connect.

“The benefit of these bracelets is based on the notion that magnets have a positive effect on living tissues. According to some researchers, magnetic healing bracelets can help to reduce hip and knee pain. Some theorists believe that the magnetic field facilitates the production of natural analgesics, endorphins and melatonin in the body. This helps to improve blood circulation, promote healing and reduce pain, inflammation, stress, anxiety and even stomach issues.”

I do feel a little concerned that I’m spamming.  I mean, I’ve been sharing my creations on Pinterest, my SignatureEnchantment Facebook page, Instagram, Twitter, my personal Facebook, my WordPress accounts, and of course by means of mouth.  It’s just so fun.  I love to see progress and social media is a great way to advertise.  It does seem progress comes in waves.  If I add a new bracelet, the views come pouring in.  Without a new addition, the stats are stale.  Maybe I need to change some things.  If you have any ideas or tip or even critiques, feel free to share them. 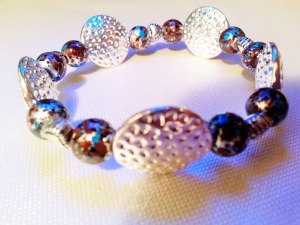 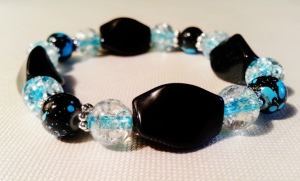 Winter is moving in and I’m still doing ok. *Knock on wood* Ever since the “new me” came to be earlier this year, I’ve been fearing a let down. Spring came and went, things were ok. Summer came and went, wow this is amazing. Now Fall is here and on it’s way out and I still can’t complain at my body. My energy levels are still up most of the time and overall pain isn’t a factor. Which is great considering my daughter is now one year old and mobile. My son is surprised to see me doing things and questions me quite frequently because he only knew the sore mommy…the tired mommy…the I can’t honey, mommy. The joy and disbelief on his face outranks mine. Tossing a football around with him in the backyard seemed only a dream even last year. Now it’s reality. I swear I even saw a tear in his eye. For a five-year old, that’s huge!

I’m still a little nervous as to what will happen when the temperatures drop to zero and below freezing.  I guess I’ll do my best to stay warm.  Although, at least one time this winter;  I want to have a snowball fight, make snow angels, go sledding, and build a snowman with my family.  Followed by us all cozied up together with our hands wrapped around mugs of hot chocolate and rosy cheeks.  There will have to be pictures as well.  A way to remember the time I pushed the boundaries and enjoyed things with my family instead of standing by and watching.  Someone else will have to hold the camera this winter!

A current picture of my right hand.

1.   Raise both arms above your head and stretch out slowly and reach as high as you can.  Taking a deep breath in as you raise your arms.  When you reach the peak, breathe out slowly.  Keep your back as straight as possible.

2.  Try to touch your ear to your shoulder…hold it.  Now the other side.  Next put your chin to your chest as close as you can and hold it.  Bring your head back and look up above you, now extend back even further to see behind you.   Turn your head side to side, trying to make your chin parallel to your shoulder.

3.  Turn your torso to the left and right.  Really try to push so that you can see behind you.  Next, put your hands straight out in front of you and tuck your head down then reach.

5.  While sitting, and your feet flat on the ground, lift your heels off the ground so that only your toes touch.  Then rock your feet so that your toes are off the ground and now your heels are there instead.  You can do this one even as you’re sitting and surfing the net or checking email, etc.  Try to do this for at least 3 repetitions of 10.  I feel lots of popping when I do this, but it feels good as well.

My wrists are mostly fused, my fingers have deformities, my ankles have lost a lot of range of motion, and my neck appears to be permanently stiff mostly because I wasn’t doing what I should’ve been doing.  It doesn’t take long, and it’s a good habit to keep stretching.  There are many  stretches you can do.  Stretching to reduce stiffness can be very beneficial.  Hope you feel even a little bit better.  Feel free to add stretches you like to do.

My mom was admitted to the hospital today with congestive heart failure. My posts may be rare in the coming weeks. Wishing you all pain-free days!

***UPDATE***  My mom is home from the hospital and doing fair.  Although she has to make many lifestyle changes, things are looking ok.  I’m hoping to find some time very soon to get back to writing.

Thanks for the support.  Seeing those views coming in, keeps me writing.  I’ve been mostly writing about RA.  That’s the topic I know best and I’m hoping maybe I can actually help someone.  May you keep moving, keep smiling, keep trying, keep reading, and keep writing!

StyleBreakdown
My great Wordpress blog
The Growing Stone of Hope! Each Click makes a difference!